Here There Be Dragons: Utilizing Pareidolia in My Art Process 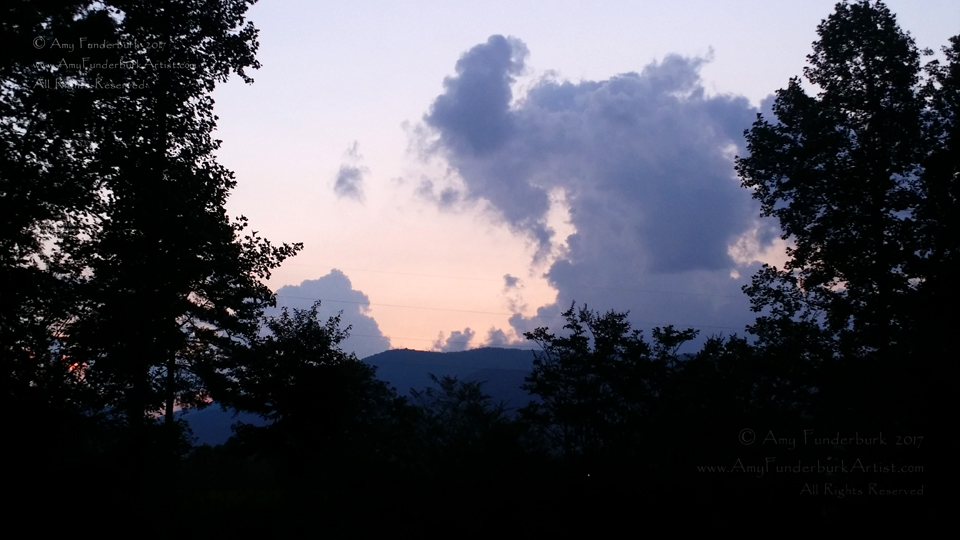 What do you see in the clouds above?

I see a giant moose. Or someone with a tiny head, sitting back on his heels while flexing his muscles. And a pyramid in the distance.

The Druids practiced such cloud watching as a form of divination called Neladoracht, so for a recent #FolkloreThursday, I tweeted my question with this photograph. Answers ranged from a horse rearing backwards, to a dog with something on its nose or fetching, to a kneeling, bearded old man in various guises. A couple of folks even saw a Xenomorph – the chillingly aggressive adversary from the Alien movie franchise.

For those responders, I could only predict one of two outcomes: a bucket of popcorn with a movie marathon, or a very bad day.

Pareidolia is the impressive sounding word for something I have done all of my life, always recognizing familiar shapes in the natural chaos of the commonplace. Faces, features, and animals emerge out of wood grain, lichen, stone, and smoke, or dance in the sky as clouds. On a metal dresser at my grandmother’s house, finished to make it look like wood, the twisting would-be wood-grain shapes conjured up all manner of faces and forms to my eye. At my childhood home, the bathroom walls were covered in some truly ugly pink marlite, patterned with a thin, undulating, gold line in a feeble attempt to masquerade as marble. Evoking my visual adventures was this interior design nightmare’s only saving grace.

Merriam-Webster.com defines pareidolia as “the tendency to perceive a specific, often meaningful image in a random or ambiguous visual pattern.”1 The ink blot tests of Swiss psychoanalyst and psychologist Hermann Rorschach are another example of this phenomenon.

Along with the primal color red and the written word, the human face gets what I call “automatic emphasis” in an artist’s composition. If you don’t want the viewer’s eye to go right to the figure, you will need to do your best to somehow downplay it, because our eye has the tendency to home in on the human face. I have always wondered if this is because we look at our own reflection, then seek out the familiar, or because we are taught to make eye contact when we communicate, but, as cited on Merriam-Webster.com, “The human brain is optimized to recognize faces, which could also explain why we are so good at picking out meaningful shapes in random patterns.”2

“Art is not what you see, but what you make others see.”

In his November 2015 workshop, Water: Reflections and Translucence, artist David Dunlop recommended that artists utilize a “process of reduction and simplification” so as to exploit the brain’s physiological tendency to make sense out of what he called the “tableaux of confusion”. In other words, just as my brain easily sees animals in the weathered texture of my beloved standing stones or cloud formations, the brain has a tendency to make sense out of textured chaos. Such visual cacophony as you would also find in grass or weathered texture, your mind wants to make sense from that visual information. In this way, the viewer’s brain does part of my job for me.3

I bet most of you have also experienced pareidolia, but you might not know that in his notebooks, Leonardo da Vinci recommended this as an observation and creativity technique to up-and-coming artists. As an artist, inventor, and scientist, da Vinci was a tireless observer of natural forms and forces. In one of his notebooks, he wrote:

“I will not refrain from setting among these precepts a new device for consideration which, although it may appear trivial and almost ludicrous, is nevertheless of great utility in arousing the mind to various inventions. And this is, that if you look at any walls spotted with various stains, or with a mixture of different kinds of stones, if you are about to invent some scene you will be able to see in it a resemblance to various different landscapes adorned with mountains, rivers, rocks, trees, plains, wide valleys, and various groups of hills. You will also be able to see divers combats and figures in quick movement, and strange expression of faces, and outlandish costumes, and an infinite number of things which you can then reduce into separate and well-conceived forms. With such walls and blends of different stones it comes about as it does with the sound of bells, in whose clanging you may discover every name and word you can imagine.”

Little did I know that I have been following da Vinci’s advice all along, though usually in a different way. As an artist, it was only natural to take the brain’s inclination a step further. As I work on a drawing or painting, I automatically make correlations between the random shapes that I am depicting and the forms that I see in them when determining how the shapes interlock to create the whole. This is one of the ways I can best conclude how each area relates to the other and if I am successfully transposing what I see to paper, panel, or canvas.

What do you see in the detail shots above of my charcoal rubbing drawing, Fictitious Pictish Standing Stone? I photographed the smallest detail (third image) while looking at the drawing upside down, so you would not otherwise have seen the face that I saw as I inverted my reference photograph while working. In other areas not necessary to describing the features specific to this stone, I have had the opportunity to stay much more general, utilizing Dunlop’s “tableaux of confusion”.

I definitely experienced pareidolia when painting Second Sight/2nd Site. When I photographed the stone, I focused first on the subject and then on the background, exploiting limited depth of field with my camera. After printing a reference photograph of the stone the way it actually appears (as seen on the viewer’s left of the diptych), I flipped the other version with the landscape in focus using photo editing software before printing. Once I had both reference photographs in hand, I played with cropping the proportions and the location of the intersection between them until I arrived at a pleasing orientation. To echo the concept of sight, I wanted an arrangement reminiscent of eyes or a mask.

I folded the two reference photos along the guidelines I had drawn, but when I placed the two sides together, I discovered something quite amazing – at the intersection between the two photographs, a perfectly formed swallowtail butterfly appeared at the very top edge of the stone! When painting this, I only had to clarify the bottom forked edge of the hind wing; the butterfly shape was clearly there. Had I cropped and joined the photos in any other way, it would have gone undiscovered.4

I purposefully arranged the diptych to look like a mask or eyes, but otherwise, the butterfly is the only shape within the stone that I intended for viewers to definitely identify. When painting, however, I saw several other forms in the stone that I used for my own purposes of correct pattern placement.

Perhaps you have only looked through the holes or at the butterfly, so take a moment now to look at the stone texture. What can you find? As I painted, I tried to put such things in the left canvas as a fat rabbit with its ears pinned back, an askew skull, and a paw print; and in the right canvas, and a yellow bird, monkey, guinea pig, and a little white ghost, all in their proper places.

Sometimes I intend hidden things to be a visual reward to attentive viewers, but I am delighted when they often find things I didn’t necessarily include. As I look at Second Sight/2nd Site with fresh eyes, I now also see part of a peering kitten and quite a proper dragon on the left. One of my friends sees dragons in just about everything I paint, and now you know how and why. Let me know what you find!

3 To read more about my workshop with David Dunlop, please read Say, One Out of Two Ain’t Bad! Tales from my recent art workshops…