Confessions of a Home Haunter 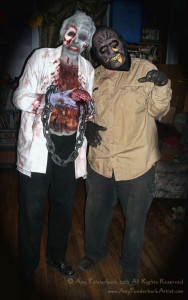 In the fall, a young woman’s fancy turns to…Halloween. Yes, I remember the smell of new pencils and?the pungent, tan, gum erasers that meant back-to-school time. Yes, I too think the autumn trees are lovely as their chlorophyll retreats to reveal the actual hue of their deciduous leaves. The benefits of cooler temperatures make up for the noticeably shorter days around the Autumnal Equinox. But it is visiting the local Halloween stores that now open in late August that really gets me excited about the encroaching?fall.

Why, you ask? Why does a nice, mild-mannered, vegetarian, yogini artist like me love severed heads, bloodied zombie figures, and building all manner of other things that go bump in the night from chicken wire and monofilament?

I discovered that there is a term for what we do: Home Haunting.

For the past 19 years, my husband and I, with the generous help of willing friends and family members, spend each weekend during the month of October transforming our porch and yard into a?free haunted?experience for neighborhood trick-or-treaters. Over the years, it has grown and expanded into a real basement buster as?our limited storage?burgeons at the seams. What makes someone start doing something this…er, unique?

As an artist, I have long viewed Halloween as a time that you can be anything or anyone you wish for a night, with no limitations. It is a night of total freedom for who — or how — you?can be.

In artistic terms, I’ve come to think of haunted houses and other such attractions as thematic installation and performance art. The intention is simply to create fear in the visitors rather than another emotion.?Our Home Haunt?is also a time when I can think outside my usual creative box and?bring?my ideas to life?in three dimensions. Using set decoration, lighting, sound, and props, we generate a fully?immersive experience for visitors.

Originally a Celtic festival set aside to honor the ancestors when the veil between the worlds was considered?thin and?to cull the herds as they?returned from their summer pastures, Halloween took firm root here once those Gaelic cultural?seeds were brought to the US.? It eventually flourished into?the holiday of haunted attractions?and parties that now gives Christmas quite a financial run for its money.

Take an artist whose favorite holiday is Halloween, marry her to a like-minded man who wanted to make monster movies since he was five, and you have the makings of two Home Haunters.

When we were young, my father took my siblings and me to a haunted house. It is one of our most vivid memories — of our usually fearless father, startled by an initially?stark-still werewolf who revealed his true nature with a lunge as soon as we entered. Of a frightened little girl, separated from her own parents, clinging to my father’s pants leg with great desperation in the Ghost Room.??Or most of all, as we walked back to the car, how our knees were quite literally physically?knocking together from fright, just like in a cartoon.

Our parents would drive us around to the homes of family friends to trick-or-treat; we would get quarters along with our candy. I’d pick out the money, chocolate, and bubble gum, leave the hard candies in the bag, and stash my prize under the bed, only to discover the unfortunate molten booty during the following summer when I gave my bedroom a thorough cleaning.

As a child, I saw a werewolf movie on television that gave me nightmares of a lycanthrope living under my bed. The haunting image of an?arm that crawled across the floor from?Frankenstein: The True Story?lingered with me for years before I learned the title of the feature. An annual event in our house was watching my father?s favorite Don Knotts movie, The Ghost and Mr. Chicken. And?Salem‘s Lot??I would terrorize my brother by scratching at the glass of his bedroom door like the?vamped-out?boy Danny Glick, levitating in the?preternatural fog,?coming for his friend Mark. At night, my father would tell us his own versions of Mark Twain’s iconic Huckleberry Finn and Tom Sawyer stories, but somehow, the tales usually ended up being dark and scary.

My father died on Halloween night, 1992.

A few years later, my husband and I decorated our yard and porch a bit, using the homemade props that he had helped me make?for a party I had hosted prior to our marriage. A good friend came over on Halloween night?to see us in our costumes. The first trick-or-treaters started arriving, so we encouraged her to stay. She put on my black cloak and sat in a rocking chair in the front yard, cackling, “Want some more candy?” in a fabulously wicked tone. The kids were terrified, and we were delighted.

The next year we invited more friends to join us in costume, and it grew from there. Through decorating, I was able to focus on preparations for this event?instead of dwelling on my grief, and was able to turn a night of?loss into?a time to celebrate all the positive Halloween associations I had?with my father. What better way to laugh in the face of actual death and remove its sting than to pantomime it through props and makeup prosthetics? ?My brother has said that Daddy would love what we do, and would be the most dedicated?creator of?elaborate new decorations each year for the yard.

Our home haunt has?grown to such epic proportions that we’ve finally learned to be thematic and strategic with our installations each year so as to work smarter, not harder.?Visitors are frightened by the overall effect, so they don’t usually take the time to look at every tiny detail over which I used to slavishly labor. Instead of your usual stress dreams where you forget your high school locker combination, mine had become nocturnal anxieties of not being ready for Halloween when the Big Day was upon us. It’s important that we have fun with it rather than burn ourselves out — after all, why do anything if you aren’t having fun?

It’s very easy to scare?people. And I do mean?adults as well as children — we have petrified trick-or-treaters of all ages. I guess it comes from being such a Very Good Girl all the other 364 days of the year, but I confess, I love scaring people.

What is the true payoff, other than the rewarding screams of visitors’ temporary terror, followed by their embarrassed laughter? One year, a trick-or-treater’s father said to me, “You are really making memories for these kids.” I shared with him how my father had taken us to a haunted house, and how vivid that memory was for me — that making such memories for others was what it was all about.

Tweet
This entry was posted in Halloween and tagged Halloween, Home Haunt.