Loving the Alien: an artist?s perspective on the creative genius of David Bowie 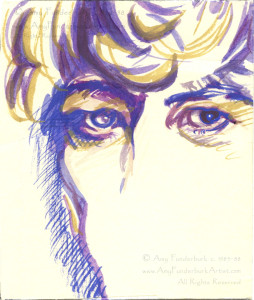 On Friday, January 8th, we celebrated David Bowie?s 69th birthday and the release of his new album, Blackstar.

At 2 AM the following Monday morning, tremendous shock tried its best to cushion my sorrow as I read the news that slowly sunk into my awareness as unbelievable truth. David Bowie had passed away on Sunday, January 10th.

“You know who I am,” he said
The speaker was an angel
He coughed and shook his crumpled wings
Closed his eyes and moved his lips
“It’s time we should be going”

I was surprised at the strength of my grief; it felt as though a long-time friend had died. Memories of how his music had affected me in both direct and subtle ways kept floating to the surface.

I realized that, since my first David Bowie memory in high school of Let?s Dance, his music was part of the soundtrack of my life.

In college, I took it upon myself to further my David Bowie education. Unlike many bands that I was introduced to by other music-loving friends, I am proud that I purposefully sought out more Bowie, and devoured every album that I came across.

One good look at my artwork and you might rightly guess that I like drama and romance in my music as well as the visual arts. Bowie offered all this and more in spades, and his creative methods are still excellent examples for artists of any discipline who quest for greater lateral thinking.

Turn and face the strange. For me, a scene from Ziggy Stardust and the Spiders from Mars: The Motion Picture?1 epitomizes Bowie in his role as an uplifting flag bearer for all the black sheep, creatives, the disenfranchised, and all the rest of us who never felt as though we ran with the pack of normality.

Bowie?s arm is first outstretched to the crowd, and then he reaches for their hands in the front row. As the song rises to a nearly operatic crescendo, his voice soaring over Mick Ronson?s wailing guitar, Bowie?s famous alter ego plaintively cries:

?You?re not alone! Gimme your hands, ?cause you?re wonderful!?

Rock ?N? Roll Suicide, The Rise and Fall of Ziggy Stardust and the Spiders from Mars (1972)

As artist Paul Watson (@lazcorp) from Brighton, UK, puts it, Bowie was ?the champion of the weirdo and the outsider.? Since some artists grow up feeling like square pegs that someone is trying to force into round holes, Bowie songs naturally became like rallying cries.

Turn and face the strange
Ch-ch-changes
Don?t tell them to grow up and out of it

?Relentless creativity.? The musician?s influence on other performers is well documented, but as one of my friends in the UK (@thesweetcheat) beautifully describes, ??(Bowie) was always there as a huge influence on all the musicians I like, a major part of that big continuum of inspiration, so his passing felt unthinkable.?

Not limiting himself to just the music arena, Bowie impacted a host of creative realms, including film, fashion, theater, and other genres. He was also a painter and visual artist who worked in a variety of media. After writing a song about pop artist Andy Warhol (the artist reportedly walked off when Bowie first played it for him), Bowie went on to play the mop-wigged icon in a film about another American artist, Basquiat, 1996.

As a musician, Bowie courageously stretched himself time and again creatively, famously reinventing himself as various personas, and blowing the doors off of societal gender mores in the process.

He was a remarkably prolific recording artist; the exact number of albums listed in his discography varies depending on the source and what reissues, movie soundtracks, and various greatest hits are included. A friend reported that in the days immediately following Bowie?s passing, all of his CDs were sold out on Amazon.com, and some titles still are. Since his death, I have been going through our own collection, and am nowhere near completing my chronological review.

Paul eloquently describes Bowie?s ?fearless creativity and his ability to change direction and style, seemingly without missing a step? in this way:

?His relentless creativity and agility are inspirations on my whole artistic process. It?s good to master an art form or technique, and Bowie undeniably did this many times, but he also made sure he was never enslaved to (them). He?d take something, voraciously absorb and learn it, and then ? shunning any notions of purism or preciousness ? radically change it or combine it with something very different to create something new.?

One of my very favorite methods employed by Bowie to this end was his use of a Dadaist technique to create certain lyrics. He would take lines from diaries and other varied sources, cut them up, and then rearrange them in new, and often surprising, combinations.

Paul also cites Bowie?s frequent collaboration with others as one of his routes to arrive at the new. One of those collaborators was musician Brian Eno, who worked with Bowie on the so-called Berlin Trilogy of albums Low, ?Heroes?, and Lodger from 1977 to 1979.

In 1975, Eno and his friend, British painter Peter Schmidt, created a deck of cards they called Oblique Strategies. Each card contained a suggestion designed to prod creativity. This exciting tool for lateral thinking was used by Eno on the Berlin Trilogy of Bowie albums. Examples of these cards can be found online.2

A New York perspective. My friend, artist and photographer Gina Fuentes Walker (@gfuenteswalker)3, is a longtime New Yorker. She shares her favorite memory of David Bowie, a New Yorker himself for over 20 years, as he performed at The Concert for New York City at Madison Square Garden in 2001.

Held a month after the World Trade Center towers fell during 9/11, the concert was organized to honor fallen firefighters and other first responders. In his performance, Bowie both expressed and engendered a feeling of solidarity with other New Yorkers:

?He called out to his local ladder (our neighborhood fire department stations) and sang Simon and Garfunkel’s America. Listening to that performance again in the days following Bowie’s death reminded me how raw we all felt here in the city as we tried to make sense of what happened and as we wore profound sadness on our faces.?

Gina goes on to describe Bowie?s uncanny ability to make you feel that you belonged. ?Like so many Bowie fans, I was deeply influenced by the passion in his voice, and this soulful rendition of America made me feel like we are all in the same canoe. We are all New Yorkers living and working together in the same city. Regardless of station, we live in close proximity to each other.?

Apparently, this side of Bowie, ever the collaborator, was not just stage presence. Gina explains: ?As we all now share our memories of which Bowie song or album has meant the most to us, I am surprised to know how many friends and colleagues have had the pleasure to meet and work with him on various projects over the years. Almost to a fault, everyone mentions how courteous, supportive and kind Bowie was.?

The final persona. I find that whenever an artist digs deep to translate the profoundly personal into universal truth, the creative results are always powerful. With Blackstar, Bowie?s final album, much has already been made of the true meaning behind his lyrics now that we know the fullness of what the musician was experiencing. Even in the face of this major health crisis, not only was he continuing to work, but, as you might expect of Bowie, he was confronting his situation head-on as a true artist.

I will leave it to you to watch the video for the song Lazarus, to discover what you make of the layers of death symbolism depicted. It is raw, it is brave.

Look up here, I?m I heaven
I?ve got scars that can?t be seen
I?ve got drama, can?t be stolen
Everybody knows me now

An outpouring of grief. My friend @thesweetcheat said he?d never before seen anything like the public outpouring of grief in the UK as that for Bowie. Impromptu memorials were also created outside the Manhattan building in SoHo where Bowie lived, as well as the New York Theater Workshop where the production Lazarus, co-written by Bowie, was playing at the time of his passing.

Paul shared his perspective: ?The news of his death was a very strange event here in the UK ? I?d never seen so many of my peers so affected, as I was, by the death of a celebrity.?

Yes, Bowie had kept his illness a secret from the public. Perhaps another reason that his death came as such a shock, however, was that throughout his career, we had watched while he symbolically died and reincarnated repeatedly, giving the man himself a sense of immortality. We did not know until the stage was dark that Lazarus was his final persona to be shed.

1 Ziggy Stardust and the Spiders from Mars: The Motion Picture?was released in 1983 from a concert filmed in 1973.
2 Much appreciation to Paul Watson for alerting me to Oblique Strategies.?To order the current 5th edition, visit Brian Eno?s website.?
3?You can check out Gina Fuentes Walker?s work by visiting www.ginafuenteswalker.com.

Tweet
This entry was posted in Creativity, Inspirational Quotes, Other artists and tagged David Bowie.