This post?first appeared as a feature article in the?April 2016 issue of my newsletter, Off the Easel. 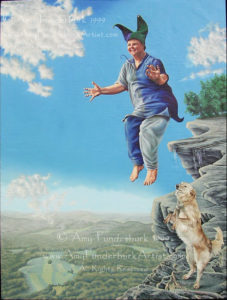 In my painting from 1999, 0. THE LEAP OF FAITH, I depict a rich and misunderstood archetype — the Fool. What better work to feature here for April Fool’s Day?

The only Major Arcana tarot card to survive the transition into the modern playing card deck is the Fool, known today as the Joker. Often it is considered the card of the querent. The Fool denotes the beginning of a new journey as well as the end of the previous cycle.
?
A playful character as well as a bit of the trickster, the Fool?s complex wisdom lies beneath the veneer of seemingly foolish behavior. What may be judged as foolish by others may be just what is needed to dislodge old energetic patterns. Who else but the jester was able to satirize the king in front of the court and get away with it? In fact, an important function of the court jester was to act as the king?s spy, since he could move within any group.1
?
Such ambiguities abound with the Fool, from the motley garment to androgyny. Even the designation of zero helps to explain the Fool?s great dichotomy, for zero is both nothing and everything. What happens to a number when followed by a zero?2

Within the Fool is the potential for every possibility; like the concepts of yin and yang, within all these apparent opposites is wholeness.3
?
The Fool is often depicted with a few bundled belongings tied to a staff, but in this painting she carries only a hazelnut. In Celtic lore this is the symbol of wisdom, for all three realms of the Celtic universe are said to be contained within a hazelnut poised on the edge of the Well of Segais.4

The hazelnut represents the end of the year cycle for the parent tree, yet is also the beginning germ of new life. While it appears to be a small thing, it is the seed of new potential with which we all jump. Like the nut, The Fool is the first step towards manifestation.

On the far right of the composition, at the edge of the cliff, is a copse of hazel trees, with the waters of the well running forth in three streams.

The inclusion of the hazelnut is the result of a dream in which the model, Robin, came to me with a hazelnut in her hands, saying she had dug it up in her backyard. Within the dream, I proceeded to tell her the story of the Celtic hazelnuts of wisdom. Upon waking, I knew this had to be included in the painting.

My mother said of this painting that the dog was the one who really had faith, loyally accompanying the Fool wherever she goes. Does the dog warn of impending danger, or does she encourage the jump? The Fool does not look down; she is joyous and not afraid.

I am revisiting this archetype in the upcoming work, Dreaming of the Fool.?This time, I get to wear the jester’s cap!

The imagery for this new painting was inspired by meeting a gentle fellow who was dressed as a perfect Fool while we were at the Merry Maidens stone circle in West Penwith, Cornwall — but that is another story for another time.